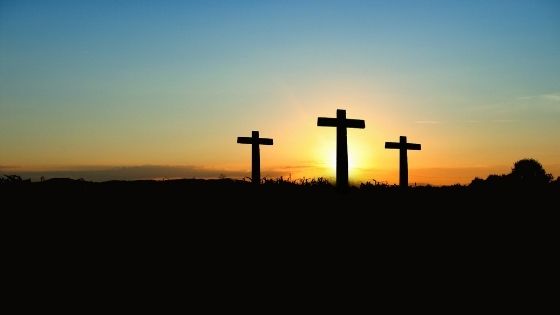 Jesus Christ is the Focus of Prophecy

1. Final Notice from the Owner

Jesus Christ is the Focus of Prophecy and the Book of Revelation is His Final Notice to this world.  The Eternal Triune God created this world and He has the authority to say how it must be run. The book tells us Christ is returning to set all things in order. He will deal with evil once and for all and judge those who perverted, destroyed, and defaced His creation.

Genesis 1:1 - God created the world
In the beginning God created the heavens and the earth. Genesis 1:1
Colossians 18,15-17 - Christ and Creation
He is the image of the invisible God, the firstborn over all creation. For by Him all things were created that are in heaven and that are on earth, visible and invisible, whether thrones or dominions or principalities or powers. All things were created through Him and for Him. And He is before all things, and in Him all things consist. Colossians 1:15-17
Genesis 1:2 - The Holy Spirit and Creation
In the beginning God created the heavens and the earth. The earth was without form, and void; and darkness was on the face of the deep. And the Spirit of God was hovering over the face of the waters. Genesis 1:1-2 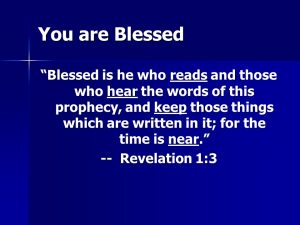 We are living in the Church Age right now and watching events preparing for the End Times. These are difficult and dangerous times for believers and the Lord promises a special blessing for those who take notice of His warning and obey His Word. The time is nearer now than when you first believed. We must be Rapture-ready!

Revelation 1:3
Blessed (happy, to be envied) is the man who reads aloud [in the assemblies] the word of this prophecy; and blessed (happy,to be envied) are those who hear [it read] and who keep themselves true to the things which are written in it [heeding them and laying them to heart], for the time [for them to be fulfilled] is near.” Revelation 1:3 Amplified Bible.

Jesus Christ is the Focus of Prophecy

The Book of Revelation is not a blueprint of prophetic truth as such. It is the revelation (singular – revealing or unveiling) of Jesus Christ. The book is all about Him. It focuses on who He is and what His plans are. He is coming back for His Church and then returning with His Church after the seven-year Tribulation period to put things right. His Second Coming has two distinct phases – the Rapture of the Church and the Return to earth.

1 Thessalonians 4:15-17
We tell you this directly from the Lord: We who are still living when the Lord returns will not meet him ahead of those who have died. For the Lord himself will come down from heaven with a commanding shout, with the voice of the archangel, and with the trumpet call of God. First, the believers who have died will rise from their graves. Then, together with them, we who are still alive and remain on the earth will be caught up in the clouds to meet the Lord in the air. Then we will be with the Lord forever. 1 Thessalonians 4:15-17 NLT
Jude 1:14,15
Now Enoch, the seventh from Adam, prophesied about these men also, saying, “Behold, the Lord comes with ten thousands of His saints, to execute judgment on all, to convict all who are ungodly among them of all their ungodly deeds which they have committed in an ungodly way, and of all the harsh things which ungodly sinners have spoken against Him.” Jude 1:14-15
Zechariah 14:4
And in that day His feet will stand on the Mount of Olives, Which faces Jerusalem on the east. And the Mount of Olives shall be split in two,
From east to west, Making a very large valley; Half of the mountain shall move toward the north And half of it toward the south. Zechariah 14:4

John’s Vision of the Lord Jesus Christ, the Focus of Prophecy 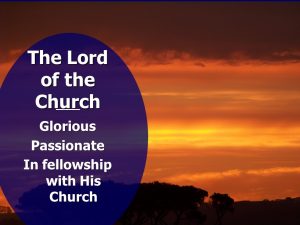 John walked closely with Jesus for three years during His earthly ministry. He saw a glimpse of His Glory on the Mount of Transfiguration, but now He sees the Majestic Lord of the Church.  He is no longer the bearded, sandaled Jesus of the 1st Century, but the Glorious Lord of Heaven.

John’s testimony is that he was “in the Spirit on the Lord’s Day” (Revelation 1:10). He was not sitting on the sand bemoaning his fate as a lonely prisoner on the Isle of Patmos. It was the “Lord’s Day” and he was worshipping His King. How much we miss when we end a busy working week with a busy “Lord’s Day” doing everything else, except taking time to worship as He commanded.

Hebrews 10:25
“not forsaking the assembling of ourselves together, as is the manner of some, but exhorting one another, and so much the more as you see the Day approaching. Hebrews 10:25

Four things stand out in particular as John gazes at the Risen Lord.

1. The Lord of the Church is in relationship with His Church 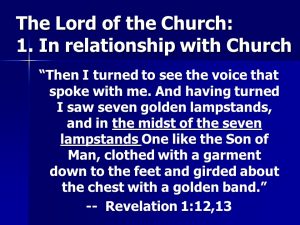 John sees a vision of seven golden lampstands or candlesticks. John 1:20 identifies this as representing the Church of Jesus Christ.

The “Light of the World” is found in the Midst of His Church. That is where we always find Him – in relationship with His Church. The Church, however it expresses itself, is God’s showpiece to the world. the Invisible Church (representing all true believers of all time) must be visible as a witness in every generation. Our light must shine in this world, Jesus said in Matthew 5:14-16. Sadly, the church has diminished that light, especially in these last days. Neglecting fellowship with one another results in great loss for the Body of Christ as well as the individual believer.

2. The Lord of the Church is Glorious 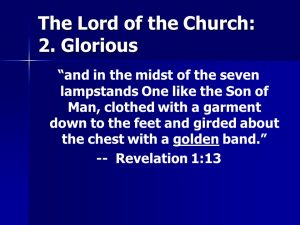 He wears the long Royal robe of a king and the golden girdle of a priest. Jesus Christ, the focus of Prophecy is the KING OF KINGS and the LORD OF LORDS. He is God manifest in the flesh.

John’s description reminds us of Daniel’s vision of the Lord.

The Lord Jesus Christ is indeed God manifest in the flesh.

“And without controversy great is the mystery of godliness: God was manifested in the flesh, Justified in the Spirit, Seen by angels, Preached among the Gentiles, Believed on in the world, Received up in glory. 1 Timothy 3:16

3. The Lord of the Church is Passionate 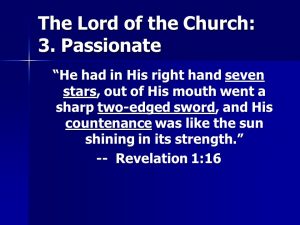 The Lord is very passionate about His Church. “His Voice is as the sound of many waters” Revelation 1:15 – strong and passionate.

He is passionate about His church and especially the leadership, represented by the seven stars. He holds leaders accountable for His people. His standard for life and faith is the Sword of the Spirit.

Revelation 1:20
The mystery of the seven stars which you saw in My right hand, and the seven golden lampstands: The seven stars are the angels of the seven churches, and the seven lampstands which you saw are the seven churches. Revelation 1:20
Hebrews 4:12
For the word of God is living and powerful, and sharper than any two-edged sword, piercing even to the division of soul and spirit, and of joints and marrow, and is a discerner of the thoughts and intents of the heart.” Hebrews 4:12
Hebrews 13:17
Obey those who rule over you, and be submissive, for they watch out for your souls, as those who must give account. Let them do so with joy and not with grief, for that would be unprofitable for you.” Hebrews 13:17

4. The Lord is Sovereign over All 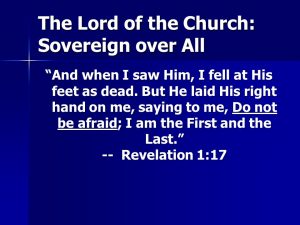 John is shaken by what He sees. I love what Jesus does next. The One who began creation is also the One who will bring all this to its culmination. There was no one in existence before Him and no one will succeed Him. He is the First and Last, the Eternal God who has no beginning, no end, and no equal.

He stoops down to the prostrate John and lifts him up. The Lord always meets us where we are. We must never be afraid of Him. In times of stress, never run from Him. Always run to Him. 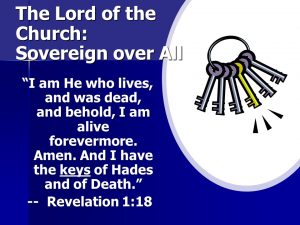 There was a song written some years ago that pictured the Lord marching into the realm of the dead and snatching the Keys of Death from the hands of satan. That concept is not found in the Bible. Jesus has the keys. He has always had them, and He will always have them. He is sovereign over all.

Jesus Christ is coming back again... SOON. Are you ready for His Return? #endtimes Click To Tweet 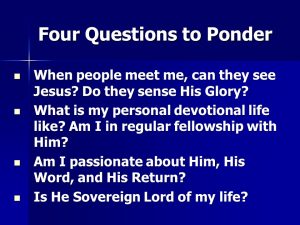 * Are we walking our Talk? Can others see Jesus in us?
* Are we spending time in His Word and in Prayer consistently?
* Are we excited about His Return?
* Are we submitted to His Word and His Will?
* What does our spiritual temperature look like?

In our next post, we will be considering together what the Lord has to say to His Church. 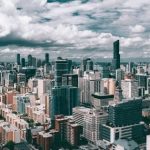 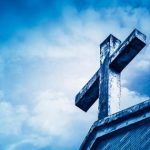